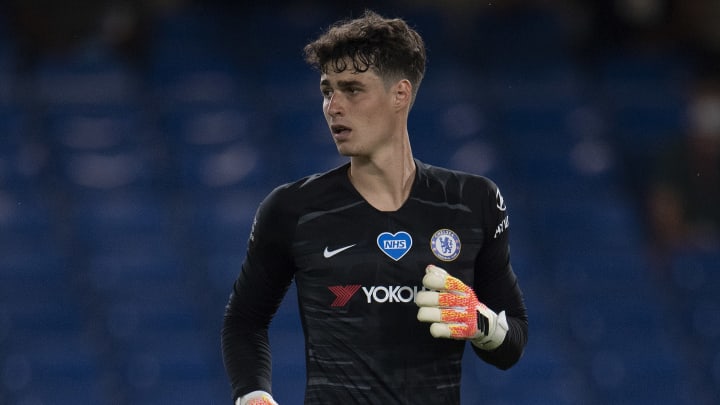 This summer has seen a multitude of players sign for Premier League teams in what has been one of the busiest transfer windows to date. Fans will be hoping they all turn out to be great signings, however, history has shown that isn’t always the case. In this article we’ll look at five signings that failed to meet their potential following a highly anticipated transfer to an English club.

Kepa Arrizabalaga – Atheltic Bilbao to Chelsea for £72m in 2018

It’s simply hard to believe that Kepa still holds the record for the most expensive goalkeeper in football after watching him between the sticks at Stamford Bridge for the last couple of seasons. Chelsea were in a difficult position following Thibaut Courtois’ forced move to Real Madrid at the end of the 2017/18 season – the board knew they had to replace him with a keeper of similar quality to be able to compete. They thought Kepa would be their man and to be fair, many others did too. At the time, the Spaniard was considered to be one of the most promising young goalkeepers in Europe following impressive displays for the Basque club. After all, he amassed 53 La Liga appearances by the age of 23; was selected for Spain’s 2018 World Cup squad and was heavily linked with a move to Real Madrid in January 2018. Chelsea’s move for the young goalkeeper made sense – maybe just not at that price.

Kepa’s potential excited Chelsea fans, however, they knew his first season could be difficult given the physical demands of the Premier League. He’d need time to accustom his game, similarly to what David De Gea had to do when he moved to Old Trafford in 2011. In fact, the 2018/19 campaign was fairly satisfactory for the Spaniard; he kept 14 clean sheets in 36 Premier League appearances and consistently featured in Chelsea’s victorious Europa League run. The Blues were hoping that he’d kick on in the following season, however, the opposite occurred. His second season in London is one of the main reasons why he finds himself on this unfortunate list. The decline in form was astonishing and led to the 25-year-old boasting statistics that a £72m signing should be nowhere near. He only kept 8 clean sheets in 33 Premier League appearances and although you can argue the whole defensive line struggled; Kepa played a pivotal role in the poor defensive record. Indeed, he had the worst save percentage record in Premier League history, ranking bottom out of 730 players with 54.5%. It was simply not good enough. To add to that, he failed to even move in 30% of his conceded goals.

Such statistics are inexplicable for a goalkeeper with Kepa’s potential and a price tag of £72m. It seems like that season wasn’t a one-off either, he made a dreadful start to the 2020/21 campaign too, leaving Frank Lampard no choice but to sign another first team goalkeeper: Edouard Mendy from Rennes for £22m. Kepa is still young and can potentially revitalise his career at another club but his stint at Chelsea for a world record-breaking fee and a 7 year contract means his place on this list is solidified.

Alexis Sanchez was involved in one of the most infamous transfer deals in football history. He left Arsenal in January 2018 to join Manchester United with Henrikh Mkhitaryan going the other way. This transfer had Man United fans on the edge of their seats and biting their nails in anticipation. Fans of other Premier League teams were undoubtedly envious of the former Arsenal’s man link-up with Jose Mourinho at Old Trafford. It was a move of intent by Ed Woodward and the United board. The Chilean forward was a fan favourite at the Emirates and probably their best player during his time in London. Following his move from Barcelona in 2014, Sanchez made 122 appearances for the North London club, scoring an impressive 60 goals. His ambition supposedly wasn’t matched by Arsenal so he decided to leave in pursuit of trophies. The Gunners were left devastated.

Excitement was at an all-time high at Old Trafford. The prospect of Alexis contributing to an attack line already consisting of Lukaku, Rashford and Martial was mouth-watering. Furthermore, his playing style seemed a perfect match for Mourinho’s favoured front-line press. To add to this, Alexis reportedly rejected a move to United’s arch-rivals from across the road: Manchester City. He won United fans over, even before he played his first minute of football for the Red Devils. However, things quickly took a drastic turn for the worse.

Amidst all of the excitement and anticipation of greatness, it can be argued that Alexis’ most impressive performance in Manchester was playing ‘Glory, Glory Man United’ on the piano as part of his official announcement by the club. Many have said that describing his time at Old Trafford as disappointing would be an understatement. The forward simply never kicked-on. Jose put his trust in the new signing, starting him on the left-wing ahead of the in-form Anthony Martial but this didn’t bear any fruit. Firstly, the Chilean ended up making 45 appearances for the Red Devils and scoring a mere 5 goals – a severely sub-standard return for a forward of his quality. Secondly, it has been reported that this move led to a breakdown in relationships in the changing room. Anthony Martial was a player’s favourite; benching him whilst he was on a great run of form reportedly didn’t go down well with some of the players. This eventually transpired to the teams’ poor performances on the pitch.

To make all of this even worse, Alexis Sanchez was Man United’s best paid player by quite a margin. Reports claim he earned a basic weekly salary of £350k a week, rising to £560k a week with image rights, bonuses and add-ons. An article by Givemesport states that Sanchez cost United £13.2m per goal, £7.3m per assist and £1.5m just for putting the shirt on! The potential, anticipation, fees and the players performances cement his position in the top five most disappointing signings in Premier League history.

Andy Carroll had a blistering start to his football career at Newcastle United. He established himself as a first team starter in 2008 at the age of 18 and played a pivotal role in Newcastle’s promotion back to the Premier League scoring 17 goals in 39 appearances in the Championship. He proved his quality the following season, scoring 11 goals in 19 appearances in the 2010/11 Premier League campaign. He quickly became a fan favourite in the North East and was even likened to a young Alan Shearer. His impressive performances and potential didn’t go unnoticed – a whole host of clubs were chasing his signature. The Englishman decided to join Liverpool in January 2011 for £35 million – a record-breaking transfer for a British player at the time. Andy had massive boots to fill as he was brought in to replace the fantastic Fernando Torres whom decided to leave Liverpool for Chelsea in a mouth-watering £50m transfer.

Liverpool fans had a lot to be excited about. They signed a young striker with a very impressive goal-scoring record and international experience at such a young age. However, it is fair to say that Carroll failed to replace Torres and his time at Liverpool was far from successful. Over the course of three seasons, the 6ft4 striker made 44 appearances and only scored 6 goals for the Reds. A record not worthy of his price tag and potential. This eventually culminated in his departure on a permanent basis to West Ham in 2013 for £15m, following a loan spell in the previous season.

Andy Carroll ultimately never achieved his potential, possibly due to numerous long-term injuries. His place on the most disappointing transfers list is justified, following such a great start to his career and a big-money move to Merseyside which ultimately ended in disappointment.

Roberto Soldado – Valencia to Tottenham Hotspur for £26m in 2013.

Roberto Soldado’s move to Spurs came with a lot of expectation. He was one of the key players that Spurs brought in with the money from Gareth Bale’s record-breaking transfer to Real Madrid in 2013. Indeed, Spurs broke their transfer fee record on the Spanish striker, paying Valencia £26m, clearly demonstrating their belief that he could be the man to replace Bale’s goals at White Hart Lane. In fairness, they had the right to believe this would be the case given Soldado’s performances in La Liga. The striker managed to amass 82 goals and 15 assists in 141 appearances – resulting in a respectable 108 mins per goal contribution. In comparison, during his time in North London, Bale made a goal contribution every 145 minutes, albeit spending the first part of his career in the left back position. Regardless, Soldado was seen as the man that could add firepower to Spurs’ attack and lead them to trophies.

Unfortunately for the Spaniard, English football did not seem to suit him and his time in the Premier League did not go as planned. He returned to Spain two seasons later. The striker simply failed to find his feet at Spurs; strikers usually need time to adapt but there wasn’t a moment during his spell in which you’d believe he’d kick on. He netted just six times in his debut season, only two of which came from open play. The second season didn’t get any better. In a total of 52 Premier League appearances, Roberto only scored 7 goals with 4 of them being penalties. To add to that disappointing scoring statistic, his overall contribution was bleak too. The Spaniard only assisted 6 goals and made 16.69 passes per game, on average.

Overall, Soldado will be remembered by Premier League fans for his impressive penalty kick taking and that’s simply not good enough for a striker of his quality and a record-breaking transfer fee. He’s the fourth name on our list.

The only defender on our list is Eliaquim Mangala. The Frenchman was touted to be the next superstar after his remarkable performances at Porto. After 95 appearances over 3 seasons during which his team were crowned champions of Portugal twice; Mangala was ubiquitous in transfer speculations. Eventually, he signed for Pellegrini’s Man City in what was an attempt to find the perfect centre back partner for Vincent Kompany. As you may have guessed by his appearance in this article, Eliaquim failed to solidify his position in the Citizens’ back line.

The French defender only made 59 Premier League appearances during his tenure in the blue side of Manchester and ultimately failed to impress his managers, especially Pep Guardiola. The Spanish manager only gave Mangala 4 league starts before freezing him out of the team and eventually letting him leave for Valencia on a season-long loan. Mangala’s subsequent appearances and the Citizens’ continued frustrations at the back didn’t prompt Pep to bring the Frenchman back to the Etihad. After two loan spells, one at Everton, Mangala joined Valencia permanently on a free transfer meaning City didn’t recoup any of their investment. ESPN claim that it was the third-largest gap between his transfer fee and subsequent sale return of any player in Premier League history, thus making it an easy decision to add him to this list.

We’ve restricted this list to five but there have been many more that could have featured in this article. Notable mentions are Di Maria and Veron at United, Joelinton at Newcastle and Torres at Chelsea, amongst others. Let’s see if any of this year’s signings make the list in the years to come!

Let us know in the comments who you would add – and don’t forget to follow us on Twitter!