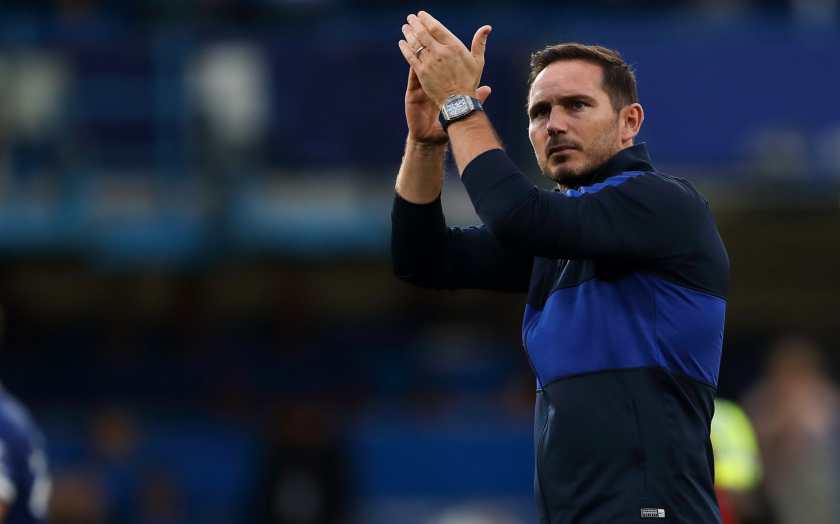 It’s been 24 years since that fan forum at West Ham and the infamous quote from Harry Redknapp: “I didn’t want to say this in front of him, but he’ll go right to the very top”. He was of course talking about his nephew, Frank, who was sat a few seats down from his then manager. Redknapp jumped to his defence after being criticised by a fan, who turned out to be a relative of Scott Canham and was suggesting he should be starting ahead of Frank. Having seen Redknapp’s tenacity in his defence, Frank grew in confidence. His edge manifests itself by always pursuing improvement, never resting on his laurels and showing his bite.

With his Dad being a footballer and coach at West Ham, his uncle Harry being a legendary manager and cousin Jamie having a successful career in the game, Frank had an awful lot to live up to. However, his drive to outperform Frank senior and breaking the shackles of being ‘Frank Lampard’s son’ stimulated a tenacity to better his achievements. Lampard is considered one of the most prolific and consistent trainers of his generation. Whether it be pounding the roads of Romford or doing shuttle runs in spikes under the watchful eye of his old man, Lampard put in the hard yards from a young age. It’s no surprise that he reached the levels he did as a player.

However, when you become a manager, your playing achievements are put to one side – although they often lead certain players into certain jobs. Undoubtedly his legendary status at Stamford Bridge got his foot in the door ahead of other suitors, but his propensity to work hard and identity as a ‘Chelsea man’ sealed the deal. The importance of a ‘Chelsea man’ is a romantic set of attributes only understood by real Chelsea fans. You must carry a certain swagger, a drive and charisma with the fans and the club. Examples being Jose Mourinho, Carlo Ancelotti and Antonio Conte. Mauricio Sarri and Rafa Benitez proving the antithesis of ‘Chelsea men’. Ever the professional, even when playing against Chelsea in his brief stint at Manchester City, Lampard scored in his trademark fashion but did not celebrate. The fans still sung his name fervently having not been given the chance to say goodbye to their hero at the end of the previous season.

When considering his managerial peers, players from the same era now managing big English clubs such as Ole Gunnar Solskjær and Mikel Arteta, they do not appear to have the same edge in their character as Lampard. He is only in his third year of management yet already had a touchline fracas with both Klopp and Mourinho. Throughout his playing career, Lampard has responded to professional and personal criticism, with the occasional dig at West Ham and Spurs thrown in for good measure.

Whilst there was a massive swell of praise when Ole took the job, and Arteta seemingly unable to do wrong despite being on a barren Premier League run, neither of them have shown signs of changing fortunes. Arteta only won a handful of trophies as a player. His most successful periods were two Scottish Premier League titles with Rangers, in a fluctuating two-horse race at the time, and two FA Cups and Community Shields whilst at Arsenal. He was not at the centre of a winning side, thrusting his team to victory week in, week out. In fact, it was a whimper of the Arsenal in the nineties and early noughties. Solskjær on the other hand has a more recognisable winning mentality: six Premier League titles, two FA Cups and a Champions League whilst a player at Manchester United. However, whilst he will always have that night in Barcelona to fall back on, he often played the bridesmaid to the bridal Yorke, Cole, Van Nistelrooy and Rooney. He was never the talisman despite his effectiveness as a super-sub. Lampard is a different kettle of fish: he was the nucleus.

Mourinho’s arrival in June 2004 had a profound effect on Lampard, as a player and the manager he is developing into. Soon after his arrival, Mourinho accosted Lampard whilst he was naked in the shower and told him that he was the best player in the world, but that he needed to add trophies. Lampard did not believe he was genuinely the best player in the world, but the confidence surge was palpable. Lampard was Mourinho’s manager on the field: oncoming substitutes handing him short notes of tactical direction and abrupt commands such as “win”. Lampard enjoyed the charisma of Mourinho and winning was then engrained into Lampard’s psyche. When congratulated on qualifying for the Champions League at the end of last season, his response was blunt and effective: “it’s Chelsea; we need to be competing for titles”. The spending that followed to make up for the previous 12 months indicated his intent and displayed his close relationship with Marina Granovskia and Petr Cech in addressing the flaws in his squad. Lampard constantly seeks progress.

Mourinho’s effect on Lampard is evident as a manager too, as seen in Chelsea’s recent 0-0 draw with Spurs at Stamford Bridge. Prior to the game, Lampard was intense – shouting words of encouragement to his players, staring over at Spurs’ pre-match warm up and pacing the turf during his own. The awareness that losing the game was not an option led Lampard and Mourinho to ensure that their team didn’t, setting up two defensive banks and occasionally marauding forward. For Chelsea fans, there was footage from 2005 where Mourinho stipulated “I’m not saying we have to win, but we cannot lose” which rang very true against Spurs and against Manchester United earlier on this season. Not a defensive manager or player by nature, but Lampard understands the need for pragmatism – a loss would have been damaging in the context of a season that is ostensibly wide open, and a clean sheet is always welcome. Mourinho was happy with implementing a low block to secure the draw and stay top, and but for some better finishing from Chelsea, he may not have walked away the happier man. Lampard was terse post-match: “we just have to focus on ourselves”.

Articulate and charismatic, Lampard has a polite and composed manner. However, in April 2009 LBC radio presenter James O’Brien got more than he bargained for after criticising Lampard’s parenting and morality after his split with fiancée Elen Rives. O’Brien had labelled Lampard a “bit of rat in the papers”, depicted Lampard as a “scumbag” who allows his children to live in “inferior circumstances” to his own and that O’Brien himself would fight “tooth and nail to keep his family together”, suggesting that Lampard would not. Lampard phoned in to LBC and his retort was incendiary yet articulate as he refuted the claims and silenced O’Brien. Lampard asserted his disdain about his life being in the public eye and normalised his experiences with those of every human being. However, he had to “wake up and listen to idiots like you (O’Brien)”. He simply would not accept any censure towards his family, children or himself. It was a day where tribalism was defeated by human nature where other fans began to see Frank as a human, rather than an opposition player. Lampard took a risk in dialling the LBC number that day but gained an awful lot of kudos for it. He showed his teeth.

Having lost his Mother, poignantly a year prior to the call with O’Brien, an undeniable emotional edge was exhibited by Lampard. It was almost as if he was no longer playing for himself or for Chelsea, but his family. The emotional celebrations of pointing to the sky on his way to beating Bobby Tambling’s goalscoring record reminded all fans just what scoring in Chelsea blue meant to him. Now as a manager, he has not relented and often appears to be itching to kick every ball himself.

Lampard only retired a few seasons ago. He is young enough to relate to the modern player, but tough enough to be respected. The effect of Lampard on players such as Mason Mount, Tammy Abraham and Reece James is undeniable – they speak so well in interviews and give everything for Chelsea. The Chelsea man has had a greater effect on his squad than Solskjær and Arteta – as shown last year when coping with the loss of Hazard and a transfer embargo. He is a more inexperienced manager than Solskjær and hasn’t had the coaching experience Arteta did under Guardiola, but Lampard is his own man. Ably assisted by friend and former teammate Jody Morris, the financial backing of Abramovich and Granovskia and with a raft of young, hungry talent, Lampard could be building his own ‘Roman empire’. Not bad for the chubby kid from Romford who was doubted all those years ago at West Ham.

Do you think Lampard’s edge will bring him more managerial success than the likes of Solksjaer and Arteta? Let us know in the comments below and don’t forget to follow us on Facebook, Twitter and Instagram!